In the last blog we had discussed, at a very high level, the BASEL accords and their role in the dynamically changing landscape of risk analytics. These accords lay down the basic guidelines to ensure capital adequacy for the banking institutions against both expected and unexpected losses. Both expected and unexpected losses are manifestations of stress situations and testing the stability of a banking model under such adverse situations is indispensable from the regulatory perspective.  With this idea in mind, we discuss the very basic framework of two important regulatory documents on stress testing: Dodd-Frank Act Stress Testing (DFAST) and Comprehensive Capital Analysis and Review (CCAR). 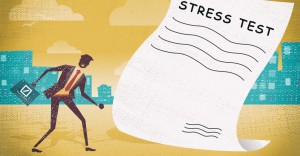 Stress testing is a technique to test the stability of an entity or a system under adverse conditions. Two specific objectives of stress test are: (a) to identify the vulnerabilities in tranquil times and act as an early warning signal (b) to support crisis management and resolution.  Stress testing the financial institutions across the world has become inevitable after the 2008 Financial Crisis. This has been a tool extensively used by the Federal Reserve for evaluating the capital sufficiency of the US banks to absorb losses resulting from the stressful economic and financial market conditions.  The Dodd-Frank Act Stress Test (2010) and Comprehensive Capital Analysis and Review (2011) are two well-known stress testing  regulatory documents for the US Banking sector to comply with.

The Dodd-Frank Act Stress Test (DFAST) is a forward looking quantitative evaluation of the impact of stressful economic and financial market conditions on the capital of the Bank Holding Companies. It requires the Federal Reserve to conduct an annual stress test of large bank holding companies and all non-bank financial companies designated by the Financial Stability Oversight Council (FSOC). Bank Holding companies with total consolidated assets of $50 billion or more and non-bank financial companies designated for supervision by the board are subjected to annual supervisory stress test.  Under this act all financial companies with more than $10 billion in total consolidated assets that are supervised by Primary Federal Financial Regulatory Authority are required to conduct an annual company run stress test and also conduct a mid-cycle stress test under the company developed scenario.

The Comprehensive Capital Analysis Review (CCAR) evaluates a bank holding company’s capital adequacy, capital adequacy process, and planned capital distributions, such as dividend payments and common stock repurchases. As a part of CCAR, the Federal Reserve evaluates whether BHCs have adequate capital to continue operations throughout times of economic and financial market stress and whether they have robust, forward looking capital planning process that account for their unique risks. If the Federal Reserve objects to a BHCs Capital plan, the BHC may not make any capital allocation.  Mid-size and small-size firms need not go for CCAR process, but the large banks must be CCAR compliant. The banks which have participated in CCAR (2015) are: Bank of America, Citigroup, JP Morgan Chase, Wells Fargo, Goldman Sachs, Morgan Stanley, American Express, Bank of New York Mellon etc.

Though DFAST and CCAR may appear to be similar, because they both are supervisory stress test procedures. But, there are two major distinctions between the two: First, DFAST tries to assess the capital adequacy of a bank under adverse economic conditions, given their current dividend and share repurchase plans. CCAR, on the other hand,  tries to analyse the capital adequacy of the banks under adverse economic and market conditions, after taking into account the proposed capital plan of the bank in the next four quarters. Second, CCAR compliance for banks can result in having ‘a capped dividend policy’, if the Federal Reserve gives a ‘no pass’ to them. DFAST does not carry any such implications.

In our follow up blog to this one, we will discuss in details the procedure of regulatory stress testing and the different scenarios in which the stress test is conducted.