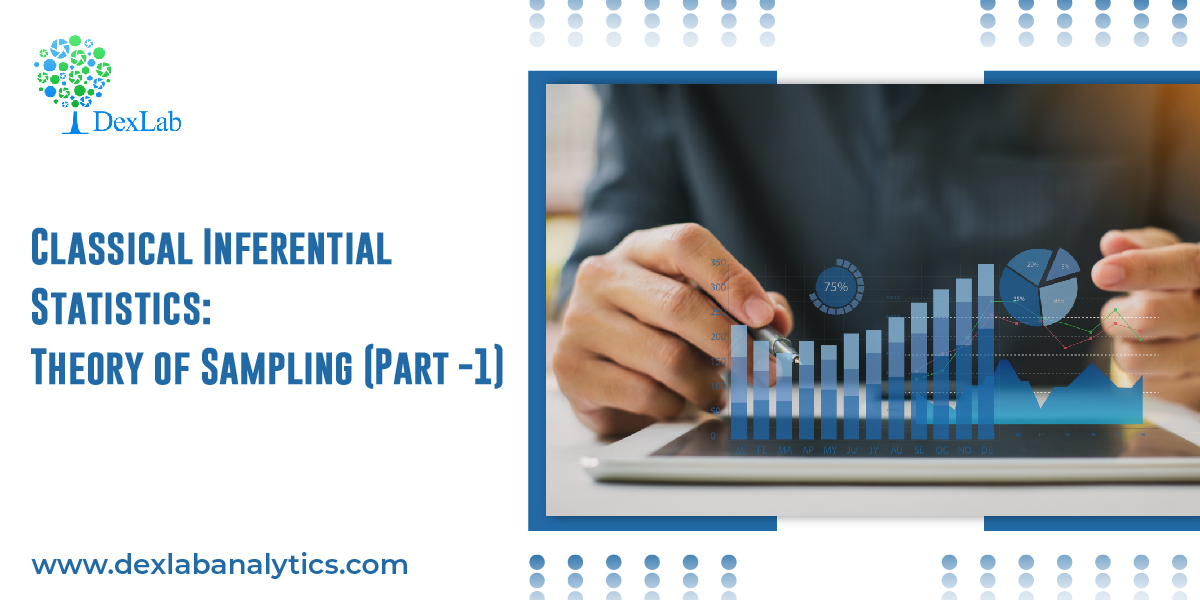 Predictive models are developed over a specific time period and on a certain set of records. However, implementation happens on a mutually exclusive time period (Out of Time Sample). Therefore, the models developed need to be trained and validated on different datasets: 1. Model Development Data (training data) 2. In sample validation data 3. Out of time validation data. A predictive model is considered to be robust, if their performance remains more or less stable in the out of time samples. An important observation from the description above is the following: The entire data (Population) is never accessible for model development and hence, is unknown. Models are developed on subsets (Samples) which are representative of the entire data. Representativeness of the samples are important to ensure the robustness in the model performance. This blog explores the key concepts related to creating representative samples from the population. Section 2 describes the basic components of the classical sampling theory, Section 3 describes the key types of sampling, Section 4 introduces the concept of Sampling Distribution and Section 5 concludes with the key summary of findings.

The two basic blocks of Classical Sampling Theory are: 1. Population 2. Samples. Populationis defined as the base of all the observations which are eligible to be studied to address key questions relating to a statistical investigation or a business problem, irrespective of whether it can be accessed or not. In real time the entire population is always unknown since there is a part of the population which cannot be accessed due to different reasons such as: Data Archiving Problems, Data permissions, Data Accessibility etc. A representative subset of the population is called a sample. The distribution of the variables in the sample is used to form an idea about the respective distribution of the variables in the population.

In a real time, any predictive modelling exercise uses the samples, since they cannot practically use the population. The population is not accessible because of the following reasons:

The key objective of the Classical Sampling Theory is to provide the appropriate guidelines for analysing the Population parameters based on the statistical moments of the sample. The statistical moments of the samples are called Estimators. The Estimators are a functional form of all the sample observations. For example, let us assume a subset of size ‘n’ is extracted from X such that the sample S is a n x k vector which is normally distributed.

are the sample means and the sample variance respectively. The descriptive moments are called statistics. A Statistic is an estimator with a sampling distribution. (Detailed Discussion: Section 4). The key objective of the classical sampling theory is to estimate the population parameters using the sample statistics, such that any difference between the two measures are statistically insignificant and considered to be an outcome of sampling fluctuations.

Broadly, there are two types of sampling methods discussed under the Classical Sampling theory: (i) Random Sampling (ii) Purposive Sampling. The different types of sampling and a brief description of each is provided in the figure below: 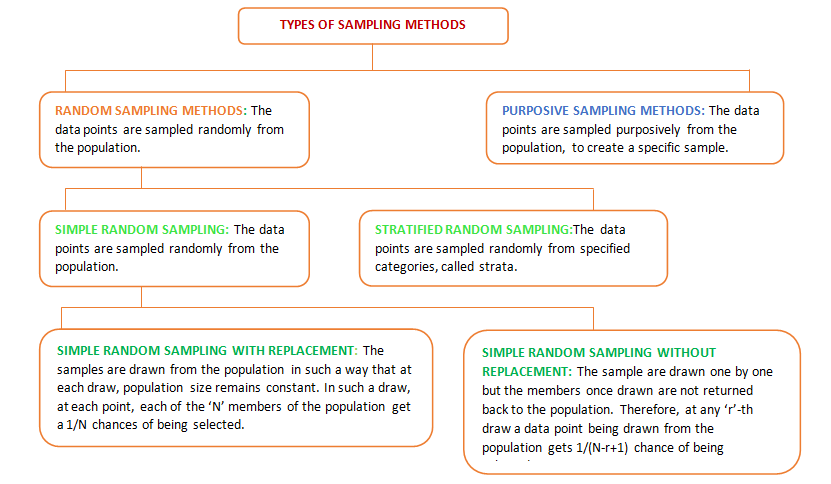 In the real time predictive modelling exercise, Stratified Random Sampling is considered to be of a wider appeal, than the Simple Random Sampling. Business datasets contain different categorical variables like: Product Type, Branch Size category, Gender, Income Groups etc. While splitting the total data into development data and Validation data, it is important to ensure that representation of the key categorical variables is made in the samples. This is important to ensure representativeness of the sample and robustness of the model. In this case a stratified random sampling is more preferred than the Simple Random Sampling. The use of Simple Random Sampling is limited to the cases where the data is symmetric and not much of heterogeneity is observed among the distribution of the values of the variables. The following examples discuss the applications of the Classical Sampling methods:

Models, when developed needs to be validated. The standard practice is to divide the data into 70% – 30% proportion. The models are trained on 70% of the observations and validated using the remaining 30%. To ensure the robustness of the model the distribution of the target variable should be similar in both the development and validation datasets. Therefore, the target variable is used as the Strata variable.

Boot Strapping Exercises exhaustively use Simple Random Sampling with Replacement. It is a nonparametric resampling method used to assign measures of accuracy to sample estimates.

The blog, brought to you by DexLab Analytics, a premier institute conducting statistical analytics courses in Gurgaon and business analysis training in Delhi, introduces the basic concepts of Classical Sampling Framework. The objective here has been to explore the broad tenets of sampling theory, such as the different methods of sampling, their usages and their respective advantages and disadvantages. The Stratification Random Sampling is a more versatile sampling method compared to Simple Random Sampling methods. The concept of Sampling Distribution has been introduced but not discussed in details. This is to be the subject matter of the next blog: Sampling Distributions and its importance in Sampling theory.