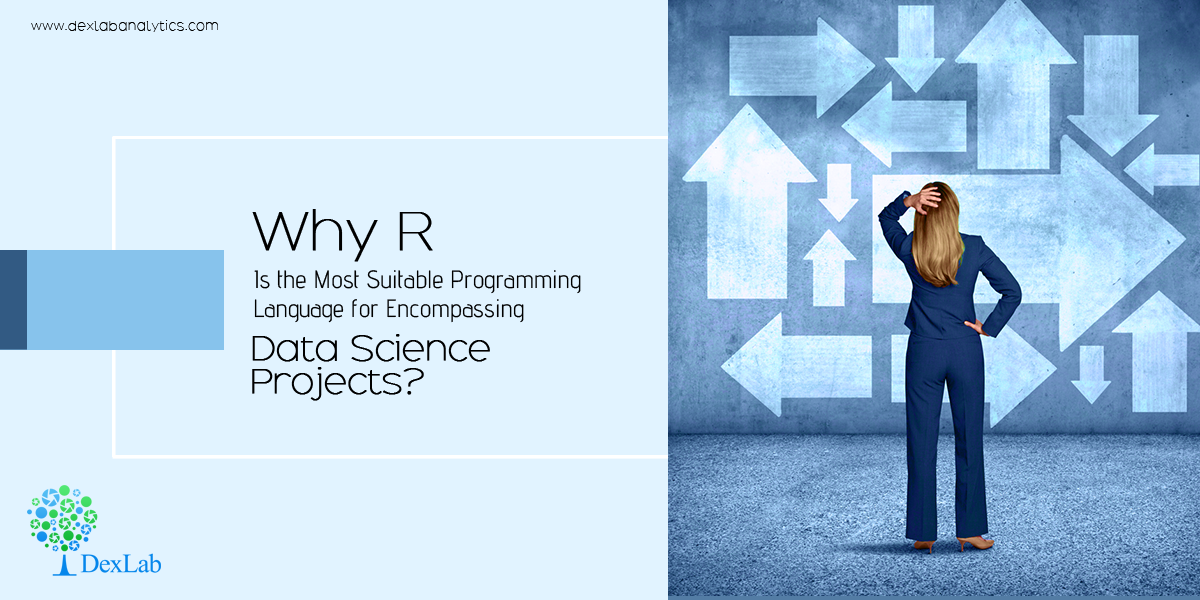 Since the early 1990’s, when R was first conceptualized, it has been leading the show in the field of data science. In the past few years, however, the popularity of R has increased exponentially – thanks to the advancement in data analytics environment. From data scientists to statisticians and researchers, R has become a hot-favorite for all. And, why not? It’s a GNU package and a free software package for statistical computing.

In this era of evolution, finding the best tool to stay ahead of the curve is the need of the hour. For that and more, we have selected R and given below are the points proving why R is the best programming tool in the competitive environment of data science.

Well, if you are aware of leading data science trends and programming languages, you will find two high-end data science tools – R and Python – they tend to be the topic of conversation for all data-related matter. Python is a top of the line programming language for software professionals who have a knack in mathematics, statistics and machine learning, but lacks big time in offering library support on subjects like Econometrics and a bunch of communication tools, including reporting.

Most of the consultants working in the field of data science belongs from business community, and have no particular interest in technical know-how about developing software and acing programming languages. Learning python would not be as much of help as it would be mastering R programming – R is a programming language that supports libraries for stats, machine learning and data science. Thus, R is the best fit for data science enthusiasts not belonging from technical background. Also, R offers support packages or libraries for Econometrics, Finance, etc. – all of this is widely used for data analytics.

For R language training in Delhi, drop by DexLab Analytics.

After Tidyverse, mastering R is easy

Previously, learning R was no mean feat. It was considered one of the toughest languages to learn and largely inconsistent; the reasons being structuring and formality. But the things started to change when Tidyverse was introduced – it’s a robust set of packages and tools that offers steady structural programming interface.

In fact, after the launch of ‘dplyr’ and ‘ggplot2’, curve complexities got reduced even more. Just like any other languages, R went on getting better with its programming interface and achieving more structural and consistent – thanks to Tidyverse – it turned out to be efficient as it includes support packages for visualization, modeling, manipulation, iteration and communication – all of these turned R a super easy language to ace on.

The biggest advantage of R as compared to other programming languages is its capability to create industry-ready reports and infographics, and ML-powered web applications. For business-related matter, no other tool is as efficient as R.

But have you wondered what makes R so popular among the business community? It’s the two special R-enabled frameworks – RMARKDOWN and Shiny.

RMARKDOWN helps in developing reconstructable reports, which are regarded as the stepping stone for building blogs, websites, presentations, books and journals. On the other hand, Shiny is a powerful framework for creating interactive web applications for R. It is handy and widely popular.

DexLab Analytics offers leading R programming courses in Gurgaon for all the data enthusiasts. Check out the course itinerary and decide for yourself. 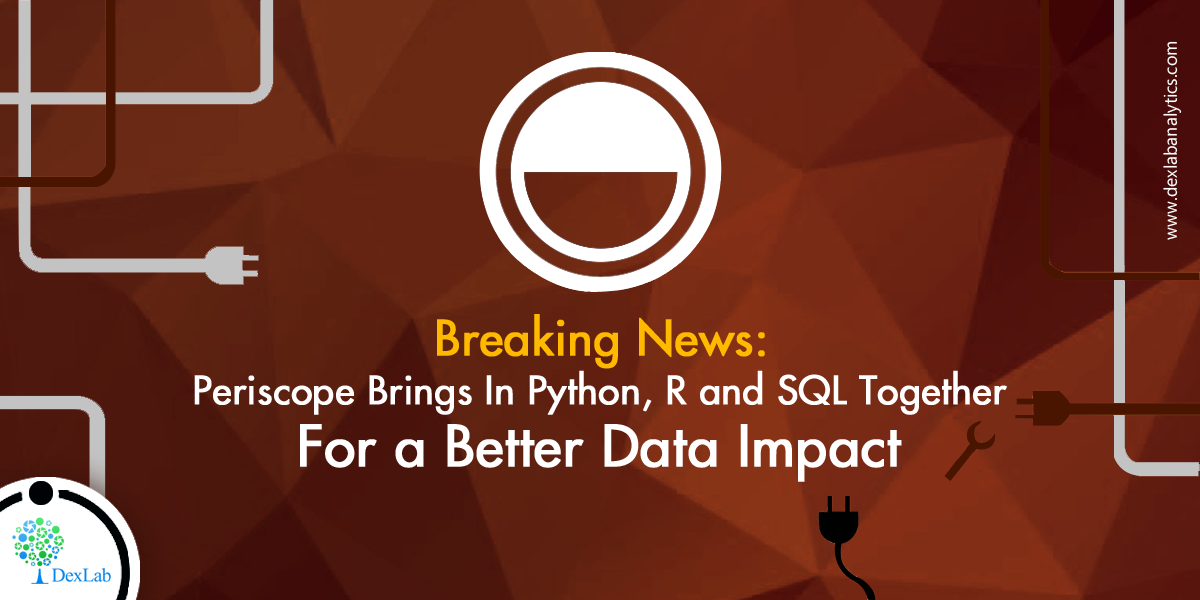 A massive data explosion is taking place around the world around us. More than 90% of the world’s data has been created in the past two years, and the numbers are still on the rise. To this, new levels of sophistication needs to be added to analyze the complexity of data – “The addition of Python and R support to our Unified Data Platform gives our customers a unique combination of tools – from machine learning to natural language processing to predictive analytics, analysts will be able to answer new questions that have yet to be explored,” says Harry Glaser, co-founder and CEO of Periscope Data.

The inclusion of Python and R support in Periscope framework comes with ample benefits, and some of them are highlighted below:

All data at a single place

Instead of relying on several data sources, Periscope Data prefers to combine data together collected from various databases to bring them to a single platform, where nothing but a single source of truth for data is established. The data collected is updated and in crisp format.

It’s time to leverage Python and R libraries and move beyond the conventional historical reporting for the sake of modeling predictions. With lead scoring and churning prediction, businesses are now in a better position to derive significant insights about a future of a company.

No more switching between tools

Seamlessly, users can switch between querying data in SQL and analyzing data in R or Python, all at the same time on a same platform. Data professionals will be able to modify their datasets, enhance the performance of their models and update visualizations from a single location.

The integration of R, Python and SQL by Periscope Data ensures the data professionals can run and share all sorts of models securely and in full compliance with all the norms, instead of seeking open source tools. Periscope Data is SOC2 and HIPAA compliant. It performs regular internal audits to check compliance requirements and safety issues.

As all the analysis takes place in a central location, be sure all your insights will be thoroughly consistent, secure and free of any version-control issues. Also, Periscope Data allows you and your team members the right to read and write access when required.

To develop powerful visualizations that reach one’s heart and mind, leverage Periscope’s resources to the optimum levels. Data teams allow users to easily visualize through R packages and Python libraries so as to nudge users to explore the better horizons of data. 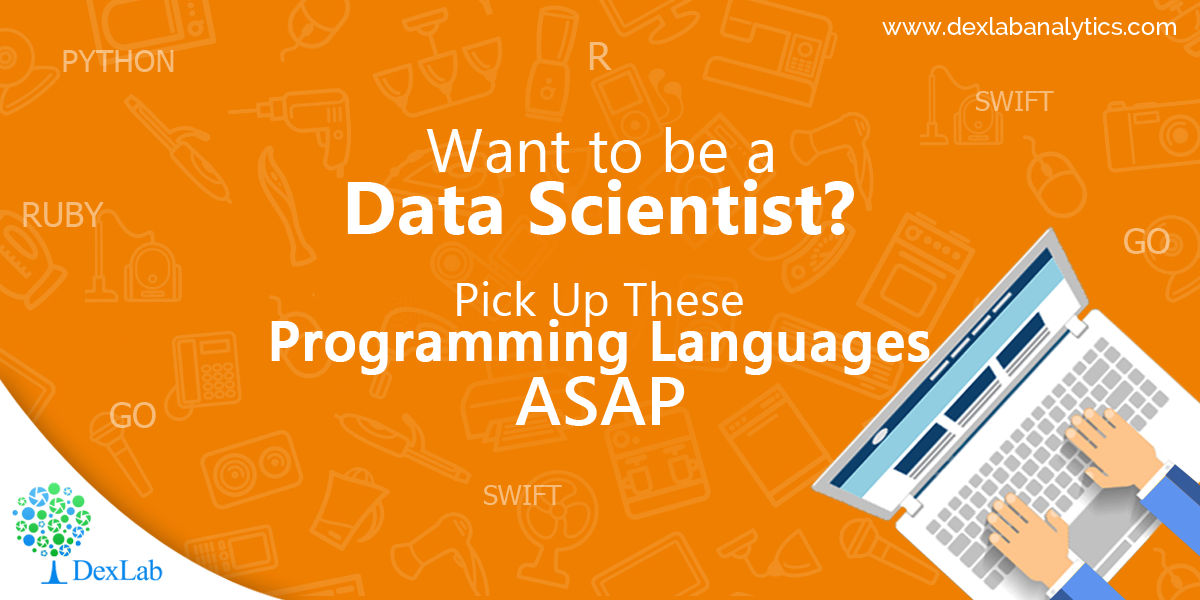 Who doesn’t want to ace the rat race!! Owing to robust technological innovations and globalization, staying on top has become an essential factor for professional success.

Amidst this, technology plays a key role. The job profiles of data scientists are fetching maximum attention. At present, they are among the most in-demand professionals around the globe bagging in handsome paychecks. Nevertheless, it’s no mean feat to become one, the process of education and training is highly intricate and demands unparalleled acumen, expertise and skill.

And with more than 600 incredible programming languages to learn, data scientists go haywire when it comes to the choosing part. While Java, Python, JavaScript, R remains the top-priority languages to impress the employers, newer, more innovative languages are also blocking the space, time and again.

END_OF_DOCUMENT_TOKEN_TO_BE_REPLACED 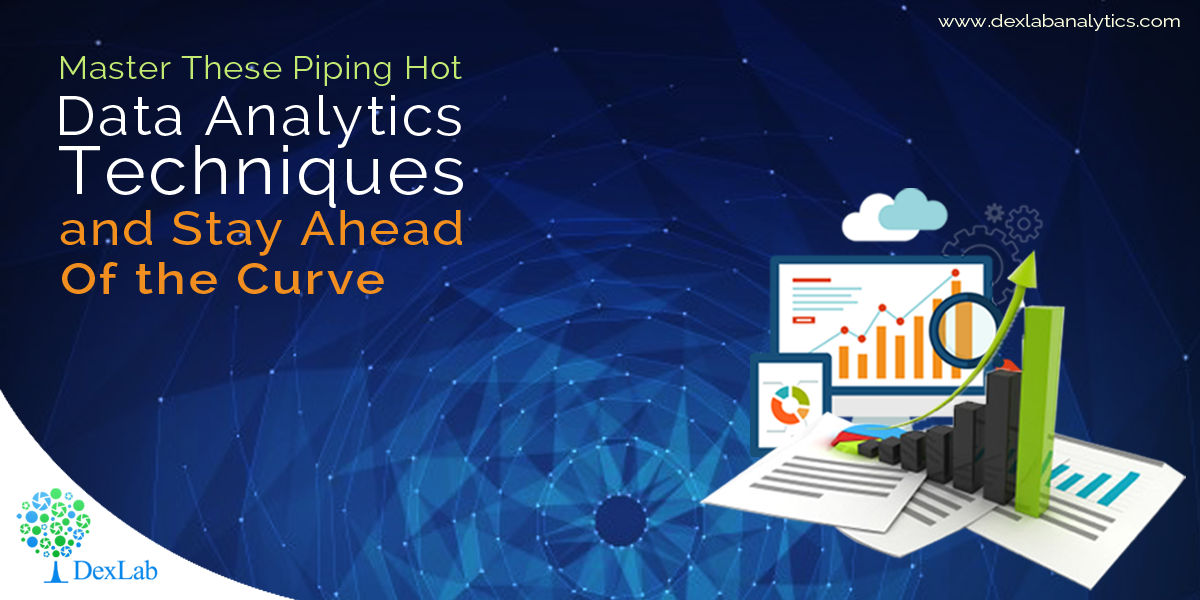 Soon, data analytics is becoming the life-source of IT. The range of technologies is varied, and the way data is expanding, we are fast moving towards a juncture where analysis of vast volumes of data will be done in a jiffy.

END_OF_DOCUMENT_TOKEN_TO_BE_REPLACED

We are back again with some awesome news! DexLab Analytics is organizing a comprehensive one-week training program for super-efficient data analytics and big data team of Mercer – a top notch multinational corporation that provides top-of-the-line solutions in Talent, Retirement and Investments worldwide. 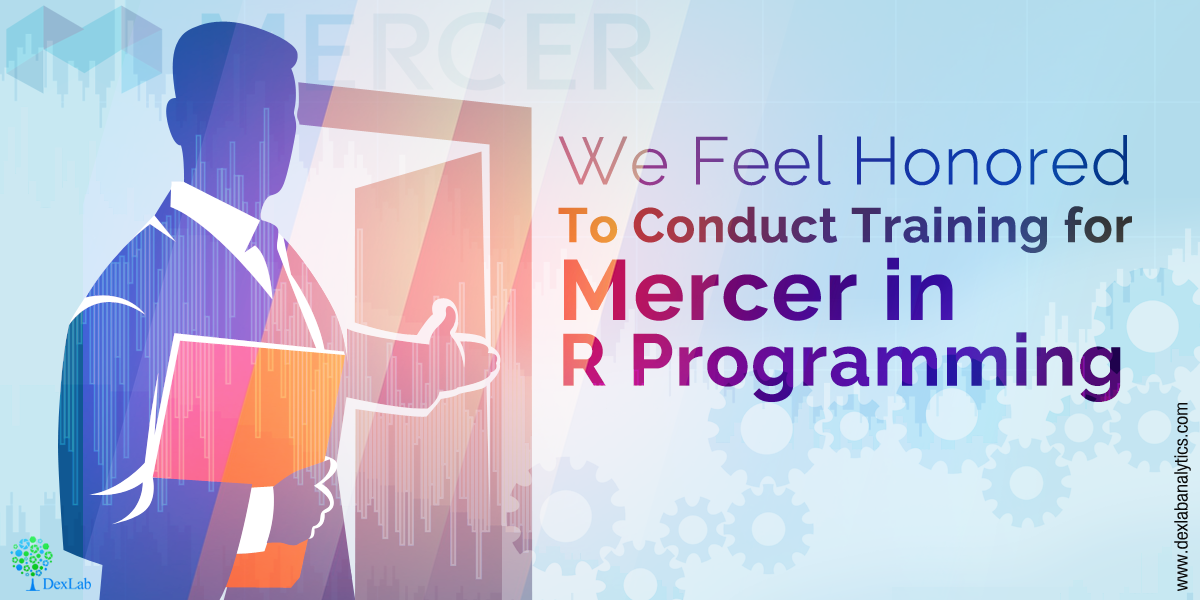 The training module has started from Thursday, 21st September 2017 and our in-house senior consultants are imparting cutting edge technological knowledge about R Programming to the data-hungry Mercer professionals. The training is taking place at Mercer’s corporate in DLF Phase 3, Gurgaon Office: with the rising demand of data analytics and R skills to imbibe, the advancement in the field of health, wealth and careers is witnessing a steady growth. To target a larger audience and loyal clientele base, R Programming skills need to be harnessed properly so as to flourish the future of business on a larger scale.

END_OF_DOCUMENT_TOKEN_TO_BE_REPLACED

To put it simply Business Intelligence is the action of extracting and to derive information that may be of use from the available data. As might be evident the process is a broad one where the quality and the source of the data structure is variable. Transformations like this might in technical terms be described as ETL or extract, transform and load in addition to the presentation of information that is of use. 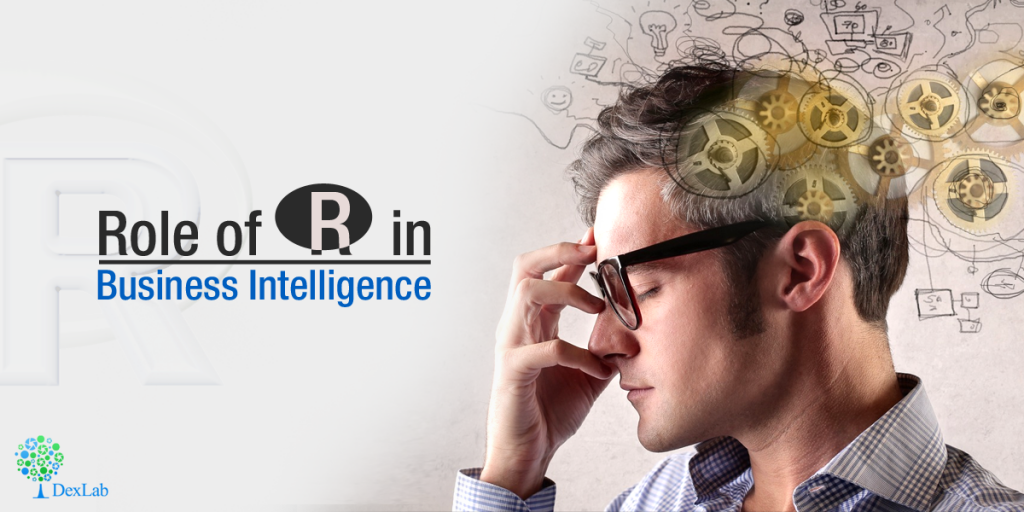 Some R Programming Experts hold that R is fully able to take on the role of the engine for processes related to BI. Here we will focus only on the BI function of R i.e. to extract, transform load and present information and data. The following packages correspond to indicated processes in Business Intelligence.

In addition to these, there are several other packages that support data in a variety of formats.

Presenting data is a wholly different ball game than the previously mentioned process of ETL. Never fear, it may be outsourced with ease to tools of BI dashboard with ease by populating the structure of data according to the expectations of the particular data tool. R is able to create a dashboard of a web app directly from within itself through packages like:

These packages let you play host to interactive web apps. They have the ability to query the data in an interactive manner and generate interactive plots. The basis for all of these is an R session engine and is able to execute all functions of R and may leverage the capabilities of statistics of all packages in R.

The above mentioned packages serve as the core whose functionality may be simplified through the use of the packages mentioned below:

The following factors are critical while R is adopted by businesses:

For more details on R Programming, get yourself enrolled in superior R programming courses in Pune. R programming certification in Pune by DexLab Analytics is extremely popular.