An In-depth Analysis of Game Theory for AI

An In-depth Analysis of Game Theory for AI 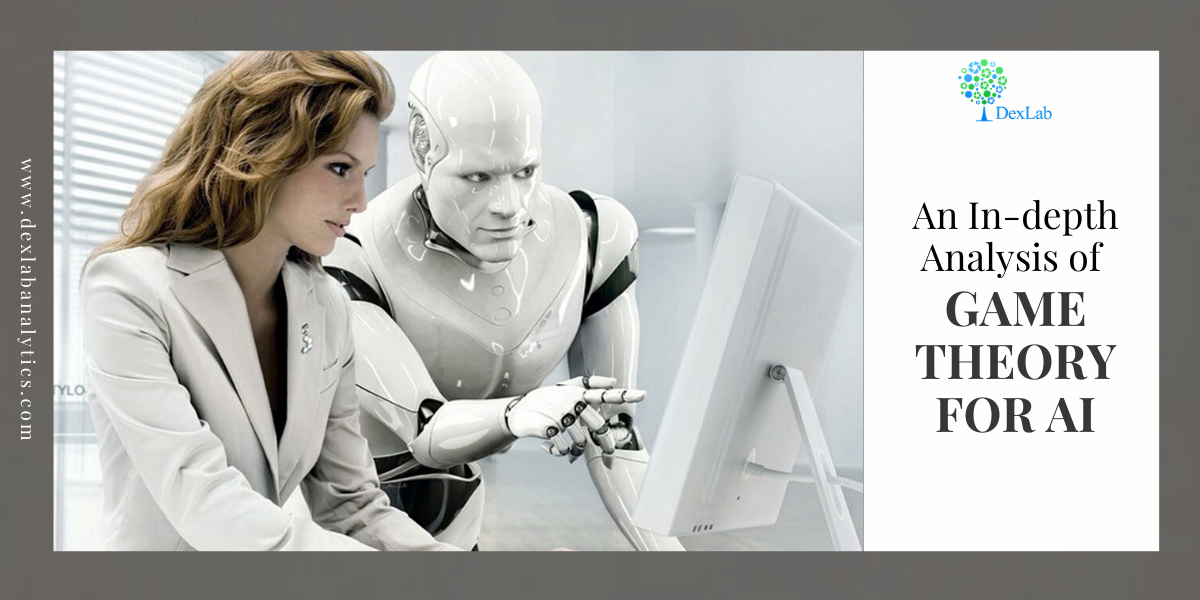 Game Theory is a branch of mathematics used to model the strategic interaction between different players in a context with predefined rules and outcomes. With the rapid rise of AI, along with the extensive time and research we are devoting to it, Game Theory is experiencing steady growth. If you are also interested in AI and want to be well-versed with it, then, opt for the Best Artificial Intelligence Training Institute in Gurgaon now!

Games have been one of the main areas of focus in artificial intelligence research. They often have simple rules that are easy to understand and train for. It is clear when one party wins, and frankly, it is fun watching a robot beat a human at chess. This trend of AI research being directed towards games is not at all an accident. Researchers know that the underlying principles of many tasks lie in understanding and mastering game theory. Both AI and game theory seek to find out how participants will react in different situations, figuring out the best response to situations, optimizing auction prices and finding market-clearing prices.

Cooperative games are the ones in which the players are convinced to adopt a particular strategy through negotiations and agreements between them.

Normal form games refer to the description of the game in the form of a matrix. In other words, when the payoff and strategies of a game are represented in a tabular form, it is termed as normal form games.

Sequential games are the ones in which the players do not have a deep knowledge about the strategies of other players.

Constant sum games are the ones in which the sum of outcome of all the players remains constant even if the outcomes are different.

Zero sum games are the ones in which the gain of one player is always equal to the loss of the other player.

Non-zero sum games can be transformed to zero sum game by adding one dummy player. The losses of the dummy player are overridden by the net earnings of players. Examples of zero sum games are chess and gambling. In these games, the gain of one player results in the loss of the other player.

Symmetric games are the ones where the strategies adopted by all the players are the same. Symmetry can exist in short-term games only because in long-term games the number of options with a player increases.

Asymmetric games are the ones where the strategies adopted by players are different. In asymmetric games, the strategy that provides benefit to one player may not be equally beneficial for the other player.

Development of the majority of the popular games which we play in this digital world is with the help of AI and game theory. Game theory is used in AI whenever there is more than one person involved in solving a logical problem. There are various algorithms of Artificial Intelligence which are used in Game Theory. Minimax algorithm in Game Theory is one of the oldest algorithms in AI and is used generally for two players. Also, game theory is not only restricted to games but also relevant to the other large applications of AI like GANs (Generative Adversarial Networks).

GAN consists of 2 models, a discriminative model and a generative model. These models are participants on the training phase which looks like a game between them, and each model tries to better than the other.

It looks like a game, in which each player (model) tries to be better than the other, the generative model tries to generate samples that deceive and tricks the discriminative model, while the discriminative model tries to get better in recognizing the real data and avoid the fake samples. It is the same idea of the Minimax algorithm, in which each player targets to outclass the other and minimize the supposed loss.

This game continues until a state where each model becomes an expert on what it is doing. The generative model increases its ability to get the actual data distribution and produces data like it, and the discriminative becomes an expert in identifying the real samples, which increases the system’s classification task. In such a case, each model satisfied by its output (strategy), this is called Nash Equilibrium in Game Theory.

Nash equilibrium, named after Nobel winning economist, John Nash, is a solution to a game involving two or more players who want the best outcome for themselves and must take the actions of others into account. When Nash equilibrium is reached, players cannot improve their payoff by independently changing their strategy. This means that it is the best strategy assuming the other has chosen a strategy and will not change it. For example, in the Prisoner’s Dilemma game, confessing is Nash equilibrium because it is the best outcome, taking into account the likely actions of others.

So in this article, the fundamentals of Game Theory and essential topics are covered in brief. Also, this article gives an idea of the influence of game theory artefacts in the AI space and how Game Theory is being used in the field of Machine Learning and its real-world implementations.

Machine Learning is an ever-expanding application of Artificial Intelligence with numerous applications in the other existing fields. Besides, Machine Learning Using Python is also on the verge of proving itself to be a foolproof technology in the coming years. So, don’t wait and enrol in the world-class Artificial Intelligence Certification in Delhi NCR now and rest assured!